As the London Korean film festival kicks off, Youn Yuh-jung, talks about how her portrayals of racy grannies and scheming maids scandalised the nation

In her Oscar-winning turn in last year’s Minari, Youn Yuh-jung played the mischievous granny you wished you’d had: the one who ignores your fun-sucking parents, takes you on wild adventures and teaches you to do your own thing. “You’re not a real grandma,” her Americanised grandson tells her. “They bake cookies! They don’t swear! They don’t wear men’s underwear!” In real life, Youn is pretty similar: lively, funny, unpretentious, and, she admits, not all that good at cooking. The 74-year-old actor has had an unconventional life and career, and most of us in the west know only a tiny fraction of it.

“My problem is, I don’t plan anything!” Youn laughs over Zoom from Los Angeles. Unlike her character in Minari, she speaks fluent English, although she apologises for it not being good enough. Youn did not even plan on being an actor. “It was an accident,” she says. As a literature student in Seoul in the late 1960s, she visited a television studio where they were filming a children’s show. A presenter on the show asked her to stand beside him and receive a present from the audience. “So I did, and then they gave me a big cheque.” She was invited back the following week to do an audition, which she passed. Within a couple of months she had the lead role in the children’s programme. Did she enjoy the experience? “Honestly, I enjoyed the cheque.”

Her career path from there was not entirely accidental. She became a rising star thanks to her TV portrayal of Jang Hui-bin, a 17th-century royal concubine. That led to offers from movie studios, but she turned most of them down. “Usually it was, like: ‘Poor girl meets rich boy and then the family denies her and they cannot get married.’ It’s all the same story. To me it was very boring.”

Then along came Kim Ki-young, to whom Youn dedicated her best supporting actor Oscar (after flirting with Brad Pitt). The film was 1971’s Woman of Fire, a melodrama that’s extreme even by today’s standards. Youn plays a rural peasant working as a maid for a well-to-do composer and his pregnant wife. Before long she is having an affair with the weak-willed maestro, and also becomes pregnant. All hell breaks loose: the story takes in adultery, rape, abortion, murder, suicide and even rat-stomping. But Woman of Fire also highlights Korea’s class divides and patriarchal traditions.

Kim was the great provocateur of Korean cinema, who has been compared with Luis Buñuel, Samuel Fuller, Nagisa Oshima and Roger Corman. His work tended towards the erotic, the lurid and the horrific, but often with a sociological bite. Woman of Fire was a remake of Kim’s landmark 1960 film The Housemaid, an influence on the work of modern auteurs such as Park Chan-wook and Bong Joon-ho (Parasite is essentially a variation on the same theme: lower-class interlopers upsetting privileged domesticity). Kim would remake The Housemaid again in 1982, after reworking similar themes in his equally bizarre 1972 film Insect Woman, in which Youn again plays the femme fatale. This time she’s a schoolgirl forced to become mistress to a wealthy man, but turns the situation to her own twisted ends.

Uninhibited, passionate and forthright, Youn came to embody a new type of independent Korean woman. Korean society really was male-dominated at the time, not least the film industry. “I’m not the Korean beauty standard,” Youn laughs. “To be an actress you had to be pretty, very pretty. They didn’t care about acting. So to them I’m very strange-looking, and in a good way. Very modern. Not obedient to anybody.” Youn credits her liberal-minded mother for that. She and her two sisters were born in Kaesong, in what is now North Korea. The Korean war began in 1950, when she was two years old. She remembers being evacuated to the south, travelling in a freight train carriage with no seats. Her father died when she was nine. Her mother trained as a nurse and raised the children single-handedly.

Youn would soon come to experience just how patriarchal Korea still was. In 1974 she married Jo Young-nam, a popular singer. “He was much more famous than me.” They moved to Florida, where Jo studied theology, and, as tradition dictated, abandoned her acting career to become a full-time mother, raising their two sons. In some ways, her American experience mirrored that of the family in Minari. “The church congregation was 2,000 people. Me and my husband were the only Asians.” She did not speak a word of English, but the community was welcoming and helpful, and she never experienced discrimination, she says.

The marriage did not last, though, and the couple divorced in 1987 (in recent interviews Jo has said he regrets having cheated on Youn). Youn had little choice but to return to Korea and resume her acting career. “Somebody had to put food on the table,” she says. The couple’s divorce was a national scandal. (She no longer engages with the Korean media, she says. Even since her Oscar win she has done no interviews with them.) The stigma of being a divorced woman meant producers hesitated to give her work. She would get small roles here and there, where nobody would notice her. “I didn’t care about what kind of role. I didn’t have any choice. I just worked.”

On camera as in life, though, Youn’s spirit seems to be irrepressible. The work steadily improved. In 2003 she began a fruitful partnership with Im Sang-soo, a film-maker very much in the Kim Ki-young vein. In A Good Lawyer’s Wife – an infidelity drama not dissimilar to The Ice Storm – she plays a grandmother who is having an affair with a younger man while her husband is dying. “I’m finally having an orgasm,” she tells her gobsmacked son. She has worked with Im three more times, including on his own modern-day spin on The Housemaid, which was a huge domestic hit and played in competition at Cannes in 2010. This time, Youn played the wily senior maid who never misses a trick. Lee Jung-jae, star of Netflix’s Squid Game, plays the man of the house. Elsewhere, she has continued to gravitate to the less polite roles: in 2016’s The Bacchus Lady she was a elderly prostitute servicing Seoul’s lonely seniors (“Don’t call me granny. My vagina is still young!”). She’s not afraid to take these roles, she says. “It’s not my life but it’s somebody’s life.”

In recent years, Youn has developed a new career as a reality TV star. Most young Koreans would recognise her today from her hit show Youn’s Kitchen. The idea is genius: taking advantage of famous Koreans’ relative anonymity abroad, a bunch of celebrities run a pop-up Korean restaurant in foreign locations. Thus, unsuspecting punters in Spain might be served by Parasite actor Park Seo-joon (who has 20 million Instagram followers) or Train to Busan star Jung Yu-mi. Meanwhile, chef Youn is toiling away back in the kitchen. “Oh I was very tired,” she laughs. “My legs were swollen and I complained, ‘This is harassment of elderly people!’” Initially she refused to do it: “I don’t cook! If my maid is not coming to the house that day, I will just go hungry. But [producer Na Young-seok] kept coming to my house and trying to convince me.” Eventually she gave in, and the show has been a smash hit. In one episode, a guest invites Youn to come and cook at his hotel in Switzerland. The show might not run much longer: the anonymity of Korean stars is fading by the day. Korean culture is now a global force, in cinema, in pop music and in television. Youn hasn’t watched Squid Game yet, she says. “I’m here in LA. If I start watching it, I’m afraid I won’t be able to stop, so I’ll wait till I get home.”

Does she have an explanation for why there’s so much great cinema coming out of the country these days? “There has always been great cinema in Korea,” she says. “But it’s only now the rest of the world is paying attention.” She says when she met film-maker Park Chan-wook after the Oscars, “he said, ‘I’m wondering, why did you get the award? Because you can act that in your sleep. It’s nothing special to you.’ He meant, I think, nobody saw me while I was acting in Korea.” 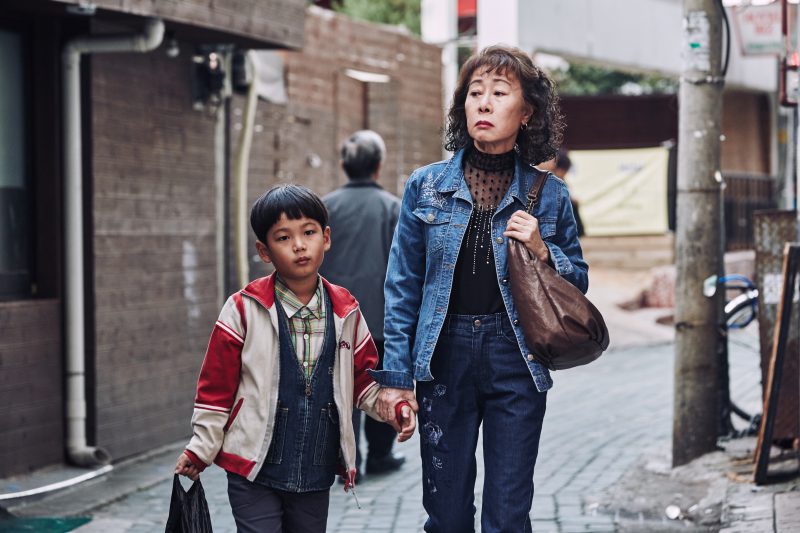 Youn now has work on both sides of the Pacific. Just before the Oscar nominations she shot Pachinko, a miniseries for Apple TV adapted from the bestselling Korean-Japanese-American immigrant tale. She gets offers from the US, but “nothing suitable”, though she would love to do another movie with Minari director Lee Isaac Chung. She’s always up for something new. “I like adventure. I’m either very brave or very ignorant. But when you know everything you cannot do anything.”